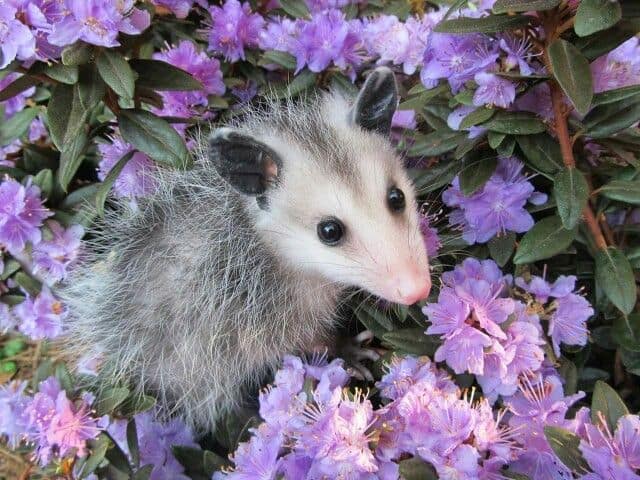 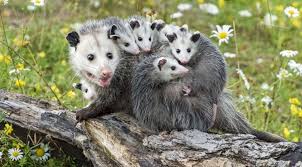 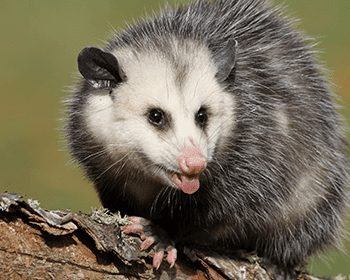 Do you need humane opossum removal in Memphis TN? Opossums can be a real terror to those who are truly afraid of them. Often times, those little guys mean no harm, but few people will accept them in the house! And that's where our opossum removal service comes in to help.

Opossums are vital to the ecosystem, but when they make their way into an attic or the living room, very few people are happy about it. Our opossum removal service will trap and remove opossums, but we will also perform an inspection of the property to determine how they got in, and offer you a full solution to completely solve your wildlife control problem.

Some folks may think the opossum is not the brightest bulb in the box, but there are several areas of intelligence in which they soar.  Opossums have a remarkable ability to find food and remember where it is. When tested, opossums outscored rats, rabbits, cats and even dogs!

Opossums can be found in or around your property because one or more of their primary needs are being met. Exterminators cannot treat an opossum problem like they would an insect problem. There is no spray or magic potion to remove them. However, our technicians are skilled at humanely trapping and relocating problem opossums.

The ideal opossum habitat is woodland, farmland, and suburban neighborhoods with water nearby. But they are also common visitors to backyards that provide the basic necessities, such as a source of water, food and appropriate den sites. Opossums are not particular, but they will gravitate toward areas with reliable water access. Although they spend most of time inland or in trees, opossums will head to the water to escape predators. Opossums can swim both underwater and along the surface. 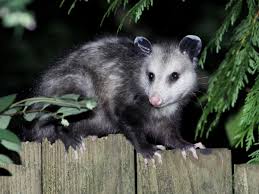 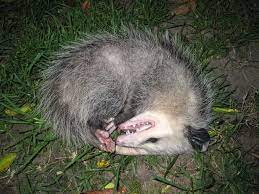 Perhaps the most intriguing characteristic is the opossum’s ability to play dead. When confronted by danger, opossums can either make a run for it, climb a tree, or feign death. They can growl, belch, bare its teeth, urinate, and defecate. When all else fails, they “play possum” and act as if they’re dead. The opossum sinks to the ground while its eyes glaze over, bares its teeth, and lolls its tongue to the side, successfully simulating death. No amount of prodding, poking, or shaking will revive the opossum from its catatonic state. The opossum is not pretending! The animal has no control over this — it is involuntary!

It’s Not Easy To Be A Baby Opossum.

Baby opossums are called “joeys”, just like baby kangaroos. Immediately upon birth, they use their strong front legs to clamber into their mother’s pouch. Young opossums are tiny at birth — about the size of a grain of rice — and are blind, deaf and furless. They are so tiny that about 10 can fit on a teaspoon! Many do not make it. Once in the pouch, life gets no easier.

An opossum litter may consist of 25 young. Mama Opossum has only 13 nipples, so only those babies able to grasp a teat will survive. If the baby doesn’t fasten to a functioning nipple, it dies. As the babies age, they start venturing out of the pouch. But instead of wandering around on their own, they will often hitch a ride, clinging to their mother’s back as she scavenges. The young are fully independent at about three months. They depart to live the life of a solitary opossum — a transition that 60 percent do not survive. 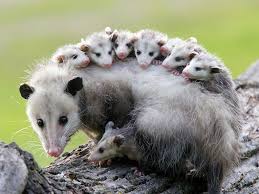 Opossums aren’t indestructible, but they do have some pretty hefty natural immunities. They do not harbor diseases normally found in dogs and cats, such as distemper, parvovirus, or feline hepatitis. Opossums are largely immune to rabies. Scientists believe that a body temperature too low to support the rabies virus is the reason. They are also immune to most forms of snake venom, including venom from cottonmouths, copperheads and rattlesnakes. This is because a protein in their blood binds to the toxins and neutralizes them. There are now research efforts to synthesize this protein to make anti-venom for humans.

Opossums have the equivalent of opposable thumbs.  The opossum is the only mammal that has four fingers and an opposable thumb, called a hallux, on each of its hind feet. They stand apart from the other toes and looks very similar to a human hand and thumb. The hallux provides the opossum with better grasping and climbing skills than most other mammals. Young opossums sometimes hang by their tails as seen in the photo to the right.  However, when they grow up they will become too heavy for hanging.

The babies sure look cute when they hang by their tails, though! 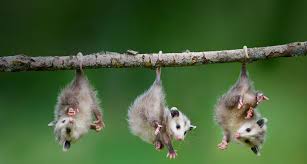 If You Need Humane Opossum Removal, Fill Out The Contact Form Below.