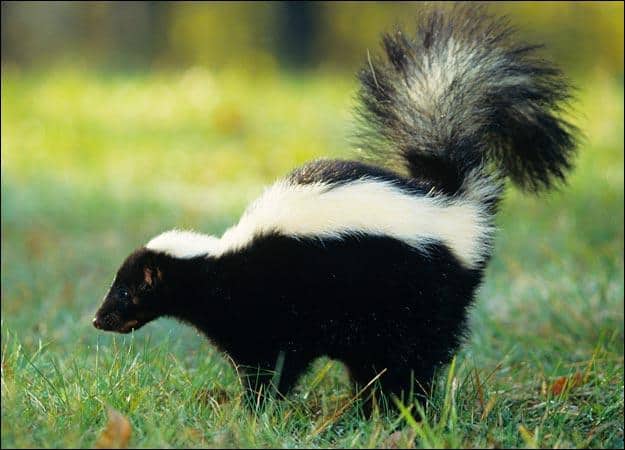 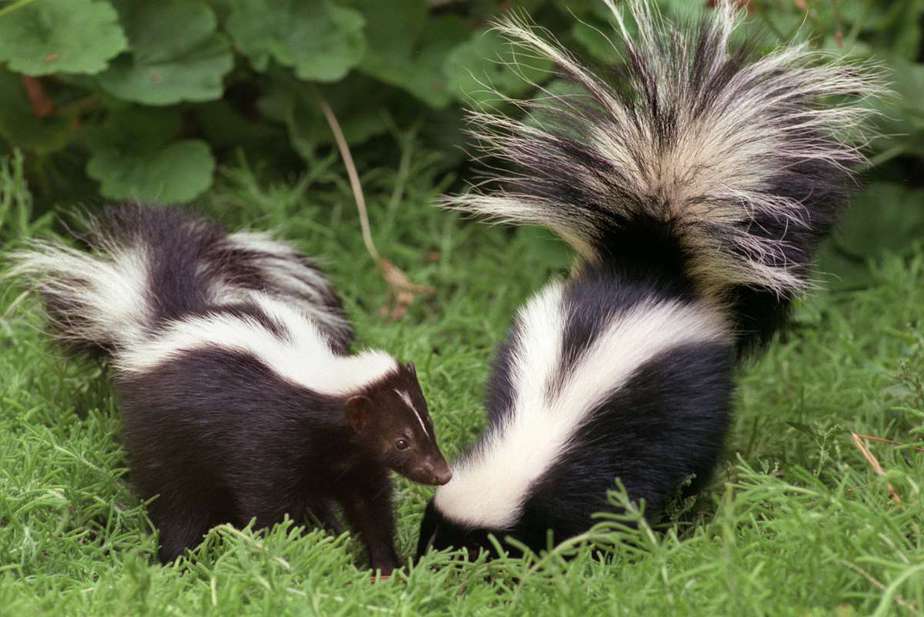 Do you live in the Eads area? Are you experiencing problems with Skunks getting under your porch, house or commercial building?

Ten species of skunks have been identified. The most common and recognizable is the Striped Skunk, which is found all over North America. Skunks are small animals, typically about the size of a house cat. They usually keep their foraging range just under a mile, though males sometimes wander several miles away from their burrow.

Our expert technicians are skilled at trapping and removing skunks from your property.  So if you have a stinky little friend who needs relocating, give us a call today! 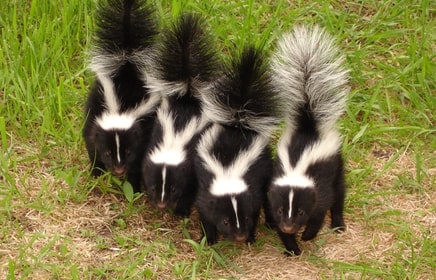 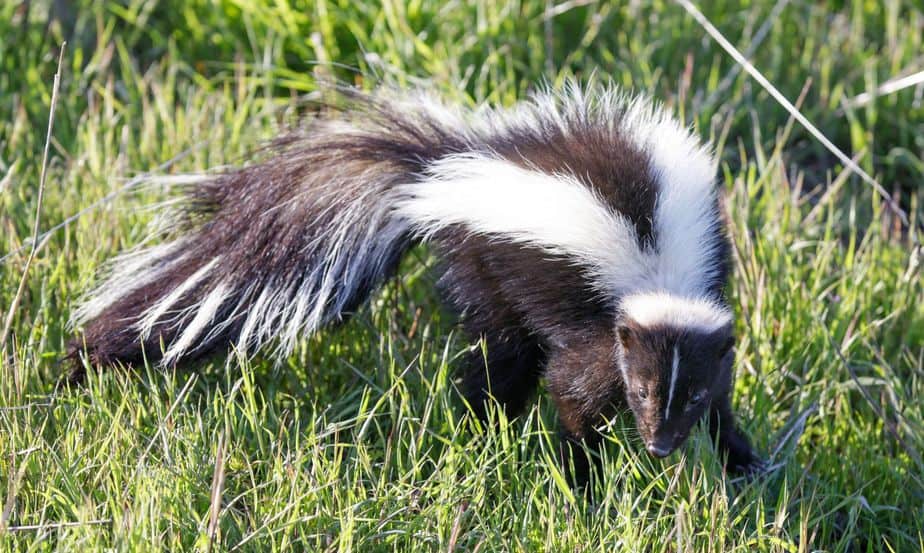 When skunks feel threatened, they give a warning before spraying. A skunk will growl, spit, fluff its fur, shake its tail and stomp their rear feet on the ground. Then they start running at you and stomping. If you don’t know what’s good for you by then, you probably deserve the spraying. (Dogs are not known for figuring out what’s good for them.) If you happen upon a skunk and are lucky enough to see the warning, get away FAST. A skunk can spray its victim as far as 10 feet away! All of these warnings are an effort to display their smelly intentions before they actually use their spray.

It takes 10 to 12 days to replenish their stinky supply. The natural production of their offensive spray isn’t quick. It can take nearly two weeks to make enough for just a few shots. So a skunk will try its repertoire of defensive mechanisms before actually spraying.

Skunks will usually avoid conflict and, most frequently, choose flight over fight. Unless they’re suddenly scared, they give you lots of warning before they spray. They will lift their tail like a flag! That lift gets the tail out of the way of the spray, but also says, “Look here, I’m a skunk.  Don’t you know what skunks do?  Shouldn’t you be leaving now?” 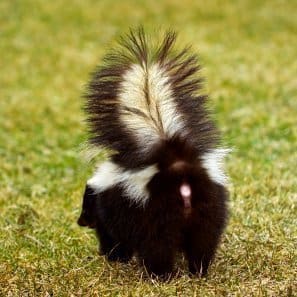 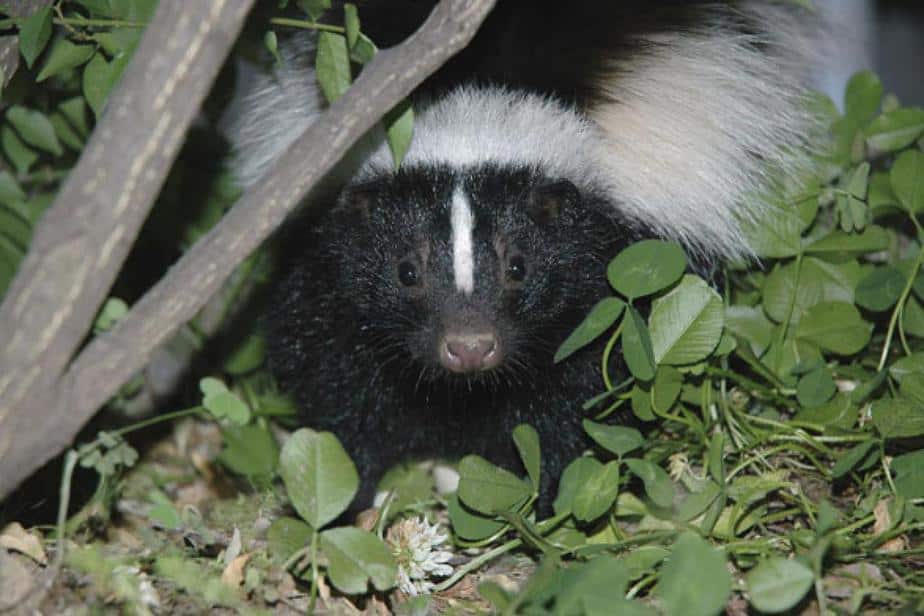 Skunks are nocturnal and most active at night. However, they will sometimes venture out during the day in search of food or to find a mate. Skunks do not hibernate. They tend to be inactive during the coldest months of winter, gathering in communal dens for warmth. The rest of the year, skunks are generally solitary, living and foraging alone.

Striped Skunks have few natural predators, except for birds of prey. Like all skunks, the Striped Skunk is one of the most recognizable of North America's animals. It is a popular figure in cartoons and children's books.

Skunks thrive in a variety of different environments. A skunk’s primary nesting site is within abandoned burrows of other animals. They also nest in hollow trees, stumps and, unfortunately, sometimes under porches and decks. Skunks have strong forefeet and long nails, which makes them excellent diggers. When no other form of shelter is available, skunks will burrow underneath buildings by entering foundation openings.

Skunks are nocturnal. You must know exactly what to look for to determine if your daytime skunk encounter is a need for concern or just a hungry mother skunk looking for food for her kits. If the skunk is exhibiting erratic or aggressive behavior, foaming at the mouth, matted or dirty gross fur, you should definitely stay away from it. Skunks are similar to cats, often grooming to maintain a healthy, silky coat. A matted coat is NOT a good sign and is definitely a cause of concern. 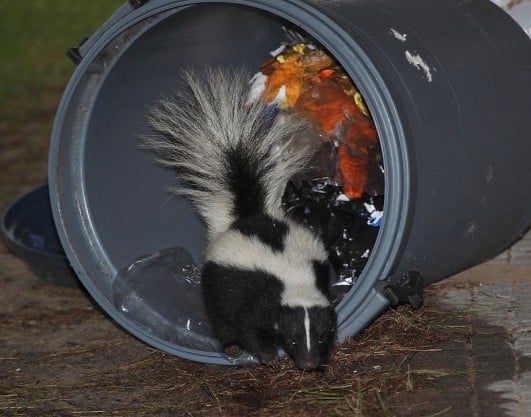 Skunks are pretty easy to keep away. As nocturnal animals who instinctively avoid conflict, an excellent way to keep skunks out of your yard is to use motion sensitive lights and lawn sprinklers. Also, check around your property to seal small openings under decks, sheds or other areas that a skunk may decide is a potential den.

Beyond the stink. A little known fact about skunks is that they can cause some serious damage to your home and yard. Skunks have large, strong claws with long nails on their forefeet that are tailor-made for digging. Over time, skunks burrowing under concrete slabs, decks, porches or other residential structures can cause structural damage, not to mention ruin lawns and make a mess out of your garbage can!

So if you have a stinky little visitor that you need removed and relocated, give us a call today!  Our skilled technicians are trained to humanely trap and relocate these fascinating little creatures.  We are here to help!

If You Need Skunk Removal In Eads TN, Fill Out The Contact Form Below.